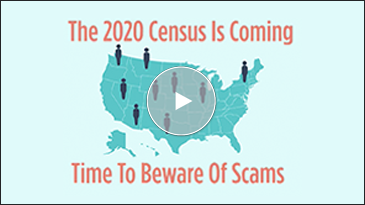 Every 10 years the U.S. Census Bureau conducts a national count of all households, and it also conducts additional surveys during any given year.

It is mandatory to complete the most important of these surveys - especially the decennial headcount that is coming in the spring of 2020. In our world of rampant identity theft some of the census questions asked might seem very personal but none involve the need to provide financial account details. That's why officials warn to be on the alert for census scams.

So what should you be aware of to avoid becoming a census scam identity theft victim?

Census officials say that most households will initially receive a census form in their regular mail prior to April 1, 2020, and that they should fill those forms out and complete them as quickly as possible. Options for doing that will include returning them via mail, doing them online, or by telephone. Households that don't respond by May 1 will be visited by census takers to obtain the information.

While the form will ask for things such as residents’ names, ages and race it won't ask for other important personal data.

The Census Bureau offers this advice:

While it's important to be aware of the upcoming census and the importance of completing the form, it's also crucial that you watch out for census scams that could target vital personal information or your money.